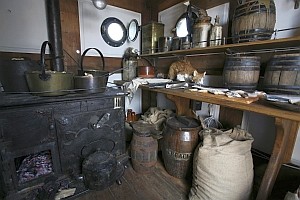 The story of Ireland is, in many ways, a story of continuous migration. Many disparate groups came to Ireland over the millennia, each one leaving their mark on the character of the island. Early Stone-age settlers came, and were followed by the Iron-age Celts. Viking traders founded the first towns in Ireland. Christian missionaries built the first monasteries. The Normans came from France via England and Wales. They built stone castles and European style market towns. Later the Plantation of Ulster brought Scottish and English settlers.
These were the arrivals, but the departures are equally notable. For more than fifteen hundred years the Irish have traveled far and wide, as Missionaries, Mercenaries, and Exiles. The Irish spread religion and learning in dark-age Europe. They fought in continental wars, and they sought refuge from political repression in Spain and France.
The 19th century brought much hardship and strife to Ireland. The oppression of a disenfranchised majority inspired political conflict, and a burgeoning civil rights movement. In 1845 potato blight killed the staple crop of the Irish tenant farmers. This economic blow was exacerbated by the disinterest, and outright hostility, towards Ireland of British politicians. Due to the inaction of Westminster famine ensued. Within seven years, 1 million people had died and 1.5 million had emigrated. A new pattern of mass emigration was in place, and would continue for a century and a half.

Follow the footsteps of the those who left during the famine

Here at the Dunbrody Famine Ship and Irish Emigrant Experience, we tell the story of famine emigration from the point of view of those who left. The brave and desperate, and above all, ordinary people who chose to leave everything they knew for an uncertain future abroad. 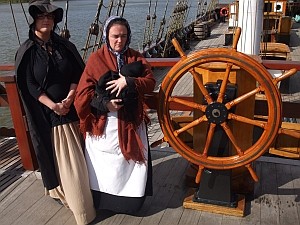 Our tour takes you to the quayside of New Ross, where the Departure Exhibit will set the scene of famine emigration. Waiting for you is The Dunbrody, a 3 masted barque that will be your home for the month long trip to New York.
On board our tour guides will explain the harshness of conditions on the voyage. Costumed performers play the roles of famine emigrants, and bring the experience to life.
At the end of the tour our Arrivals Hall will show you the fate awaiting those who survived the trip. It would take generations of hard work, and loyal service, before the Irish community were to become an accepted and respected part of North American society.

Click here for more information on tour prices and on direction to New Ross.
For Group bookings or School Tours please contact us today!

Dunbrody Famine Ship and Irish Emigrant Experience is an ideal family day out!