The original sailing ship Dunbrody was built in 1845 in Quebec.

She was commissioned, along with 7 sister ships, by William Graves & Son of New Ross and built by expert shipwright Thomas Hamilton Oliver, an Irish emigrant from Co. Derry.

In 1845, the very year of her launch, the Irish potato crop failed and food prices soared, igniting what would become The Great Famine.

Widespread starvation would soon force more than a million people to flee the country. So many people left at the same time, that there were not enough passenger ships to carry them all.

Fit Out for Passengers

Enterprising merchants, like the Graves family, took the opportunity to fit out their cargo vessels with bunks to meet the extra demand. Between 1845 and 1851, the Dunbrody Famine Ship carried thousands of emigrants to North America.

A ship the size of the Dunbrody was allowed by law to carry anywhere from 160 to 300 passengers. In 1847 she is recorded as carrying 313 passengers to Quebec. Many of her passengers were tenant farmers from the estates of Lord Fitzwilliam in Co. Wicklow and of Viscount de Vesci in Portlaoise.

Ticket Prices and Classes of Passengers

As the average farm labourer could expect to make little more than £1 per month, even a steerage ticket was well beyond the means of many people. Cabin passengers had substantial food and services provided. Steerage passengers mostly had to fend for themselves.

By 1847 the potato crop had failed for 3 years in a row, the famine in Ireland, and mass emigration, was underway. Within the first months of spring, 40 ships were waiting to disembark at the quarantine station at Grosse Ile in Quebec.

With the station utterly overwhelmed by the numbers arriving, many people were forced to wait for weeks before they could even leave their ships. In May 1847, after finally disembarking his passengers, Captain Baldwin wrote to William Graves reporting:

The Dunbrody was detained in quarantine for five days because there were too many ships queuing in the St. Lawrence River. Doctor Douglas is nearly single-handed… everyday, dozens of corpses are thrown overboard from many ships… I have heard that some of them have no fresh water left and the passengers and crew have to drink the water from the river. God help them!

Although the Dunbrody Famine Ship was detained at Grosse Ile on a number of occasions, unlike other ships her onboard mortality rate was very low. This was, without doubt, due to her efficient and humane captains, Captain Baldwin and his successor Captain John W. Williams.

On more than one occasion, emigrants writing back home praised their care and dedication to both crew and passengers. Thanks to a well-organised overseas mail service, the Captains were also able to remain in regular contact with William Graves.

The Dunbrody is Sold and Runs Aground

The Graves Family continued to operate the Dunbrody until 1869, when she was sold to another company.

In 1874, while en route to Quebec from Cardiff, her captain chose not to wait for a pilot to assist him in navigating the St. Lawrence. The ship promptly ran aground. She was fortunate to be bought by a salvage company, who repaired and resold her.

Unfortunately, in 1875 she suffered a second and fatal grounding. Sailing for Liverpool with a cargo of timber worth £12,500, a fierce gale blew her off course and onto the shores of Labrador in Canada.

While the exact details are not clear, we do know that she ran aground fully laden with a heavy timber cargo. This would have damaged her ageing hull beyond economical repair.

She was abandoned at last, left to break up over time and rot away to nothing. 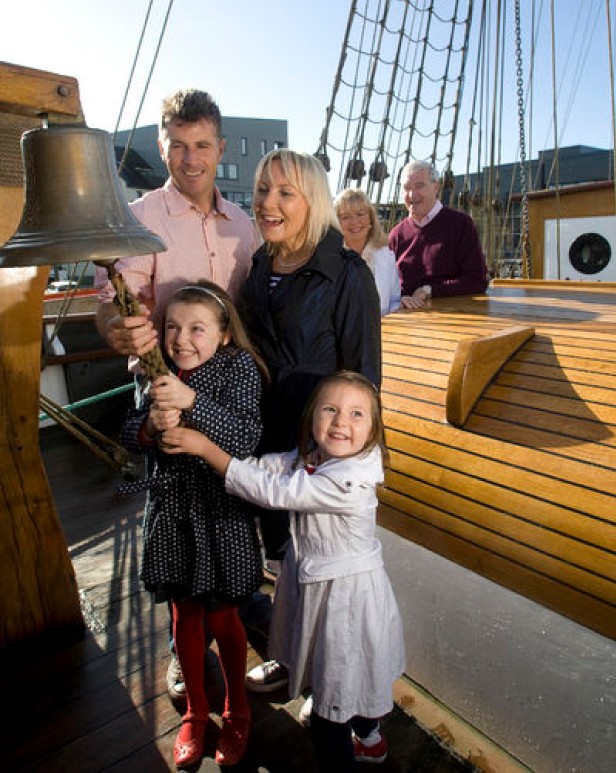