New Ross, Co. Wexford, Ireland, is the ancestral home of President John Fitzgerald Kennedy. The John F. Kennedy Trust was founded in 1988 to commemorate his historic legacy. This is done through involvement in community projects that enrich the lives of local people and invigorate the local economy.

To date the Trust’s projects include. 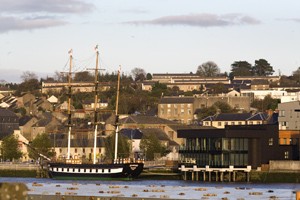 2001 to present: The Irish Emigration Database.

The Trust has completed a most comprehensive database of Irish emigration to the United States, in conjunction with the Balch Institute in Philadelphia, the Ellis Island Restoration Commission in New York and the Battery Conservancy in New York. This database is available to search for free through this website.

2001 to present: The Dunbrody Famine Ship.

Since February 2001 the Dunbrody has been moored at the Quayside in New Ross. Providing a world-class tourist experience, the Dunbrody entertains and educates in equal measure. By drawing tens of thousands of tourists to New Ross every year the project has increased the international profile of the town and brought concrete and continuing benefits to the local economy.

2001 to present: The JFK Dunbrody Festival.

Every year in July the Trust organises the JFK Dunbrody Festival. Taking place over three days, with funfairs, markets, and live music every night, this festival is the highlight of our summer.

2001 to present: The Forest of Dunbrody.

In association with Coillte, the forest at Lacken replaces the wood used in the ship and provides a local outdoor amenity. It is also the perfect way for individuals to contribute to the project. For a small donation, you can sponsor a tree and support both Lacken Wood and the Dunbrody. In acknowledgement of your generosity, you receive a handsome Sponsorship Certificate made out in the name of your choice.

2007 to present: The Irish Emigrant Wall of Honour.

A national memorial to the Irish Diaspora in New Ross, Co. Wexford. In 2011 the Wall of Honour will be incorporated as centrepiece of the redeveloped Quayside and Boardwalk.
For a small donation your ancestor can be permanently commemorated in historic New Ross.

Through the Interreg project, and in conjunction with Milford Haven Port Company and Pembrokeshire College, the JFK Trust has contributed to be development of Maritime Heritage on a European wide basis.

Following from the success of the Celtic Maritime Connection, the Interreg IV Rising Tide Project was launched. This project brings together Milford Haven Port Company, Pembrokeshire College, the Kilkenny Leader Project, and the JFK Trust. The projects aims are,